Born in Constantine, Algeria, on December 2, 1950, Benjamin Stora is professor of Maghreb History at the Institute of Oriental Civilizations and Languages (INALCO) in Paris and university Paris 13 - Villetaneuse.

He has a PhD in Social Sciences (EHESS, 1978), in Sociology (University Paris VII, 1984) and in History (1991, University of Créteil, under the direction of Charles-Robert Ageron, with distinction “Very Honorable”).  He is the founder of the Maghreb-Europe Institute, which he has been directing since 1991.

Benjamin Stora lectures on the history of French colonialism in the nineteenth and twentieth centuries, on the wars of decolonization, and on the history of Maghreb immigration to Europe at the INALCO (Oriental Languages, in Paris, and directs a seminar on the “Memory of the War in Algeria” at the Institut d’Etudes Politiques (School of Political Science) in Paris. 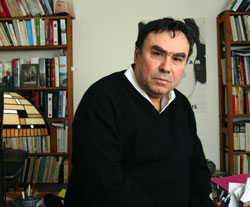 As member of the French School of the Far-East (Ecole Française d’Extrême-Orient - EFEO), Benjamin Stora conducts in 1995 and 1996 a series of research in Vietnam.  He then lives in Hanoi, for a study on Imaginations in the Algeria-Vietnam Wars.  This work was published by La Découverte Editions in 1997 and by La Casbah Editions in Algeria in 1998.  In 1998, he lectured at NYU as guest professor, and became searcher at the Jacques Berque Center in Rabat, Morocco, for three years (1998-2001).  He was in charge of a study on Moroccan and Algerian nationalisms.  The result of his research was published in 2002, under the title Algeria-Morocco, Parallel Histories, Cross Destinies (Paris, Maisonneuve and Larose Editions, Algiers, Ed Barzakh).

Benjamin Stora was also involved in many television and film projects.  He was historical counsel on the making of the movie Indochine, which won an Oscar for best foreign film (1993), commissioner for the series of exhibits on France at War in Algeria (Invalides Museum, Paris, France, 1992) and on Images of the Algerian War (La Coupole Museum, Saint Omer, France, 2002).  He published an essay on representations of the current tragedy in Algeria, entitled The Invisible War (2001) edited by the Presses des Sciences Politiques in Paris.  Benjamin Stora co-directed with Mouny Berrah and Guy Hennebelle a special edition of the magazine “CinémAction” (N° 85) dedicated to The War in Algeria On Screen.

Benjamin Stora was commissioner for the Exposition at the Sully Hotel in Paris (January to April 2004) on Photographing the War in Algeria.  He published, in collaboration with Mohammed Harbi, a collective work dedicated to the war in Algeria, in April 2004, edited by Robert Laffont Editions under the title The End of Amnesia.  In October 2004, the Editions L’Aube published under the title Algeria, 1954, a collection of articles published by the daily journal Le Monde in July 2004.  In 2005, The Memory Book of History was published by French editors Préau des collines, and Words in the War in Algeria was published by the Presses Universitaires du Mirail (Toulouse, France)